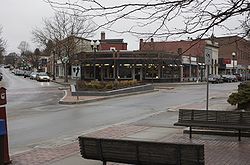 Maynard MA, located on the Assabet River, was incorporated as an independent municipality in 1871. Prior to that it was known as “Assabet Village” but was legally still part of the towns of Stow and Sudbury. There were some exploratory town-founding rumblings in 1870, followed by a petition to the Commonwealth of Massachusetts, filed January 26, 1871. State approval was granted April 19, 1871. In return, the new town paid Sudbury and Stow about $23,600 and $8,000 respectively. Sudbury got more money because it owned shares in the railroad, plus the wool mill and paper mill were in Sudbury, and more land came from Sudbury. The population of the newly formed town – at 1,820 – was larger than either of its parent towns.

Formation of new towns carved out of older ones was not unique to Maynard. Hudson, with its cluster of leather processing and shoe-making mills, seceded from Marlborough and Stow in 1866. In fact, the originally much larger Stow formed in 1683 lost land to Harvard, Lancaster, Groton, Shirley and Boxborough; in addition to Hudson and Maynard. The usual reason to petition the State’s Committee on Towns was that a fast-growing population cluster – typically centered around mills – was too far from the schools, churches and Meeting Hall of the parent town.

The community was named after Amory Maynard, the man who, with William Knight, had bought water-rights to the Assabet River, installed a dam and built a large carpet mill in 1846-47. The community grew along with the Assabet Woolen Mill and made the highest percentage of wool for U.S. military uniforms for the Civil War. The woolen mill went bankrupt in 1898; it was purchased in 1899 by the American Woolen Company, a multi-state corporation, which greatly modernized and expanded the mill complex from 1900 through 1919. From 1910 through 1940, the population of Maynard was larger than that of Acton, Stow and Sudbury, combined.

There was an attempt in 1902 to change the town’s name from “Maynard” to “Assabet”. Some townspeople were upset that Amory Maynard had not left the town a gift before he died in 1890, and more were upset that Lorenzo Maynard, Amory’s son, had withdrawn his own money from the Mill before it went bankrupt in 1898. The Commonwealth of Massachusetts decided to keep the name as “Maynard” without allowing the topic to come to a vote by the residents.

After the woolen mill finally shut down in 1950, local businessmen bought the property and began leasing it as office or manufacturing space. Digital Equipment Corporation (DEC) moved into the complex in 1957, initially renting only 8,600 square feet. The company grew and grew until it bought the entire complex in 1974, which led to Maynard’s nickname “Mini Computer Capital of the World”. DEC remained in Maynard until 1998 when it was purchased by Compaq, which was itself later bought out by Hewlett Packard in 2002. The mill complex was nearly empty for almost ten years.

“The Mill”, as locals call it, was renovated in the late 1990s and renamed “Clock Tower Place” which now houses many businesses, including the headquarters of Powell Flutes and up to 2014 Monster.com. The mill complex is also home to the oldest, still-working, hand-wound clock in the country (see image). The clock tower was constructed in 1892 by Lorenzo Maynard as a gift to the town. The weights that power the E. Howard & Co. tower clock and bell-ringing mechanisms are wound up once a week – more than 6,000 times since the clock was installed. The process takes one to two hours. The four clock faces have always been illuminated by electric lights.