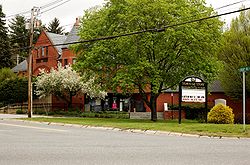 Stow MA was first settled c. 1660 by Matthew Boon and John Kettell. Coming from Gloucester and Charlestown, Massachusetts, these two men settled the land of the Tantamous (Jethro) Native Americans, called “Pompocitticut”. Boon settled by a large body of water (later bearing his name: Lake Boon), upon a hill (also bearing his name: Boon Hill), with a vast tract of land surrounding him. It is said that he traded all this for a single jackknife. He lived on what is now known as Barton Road. A monument bearing his name is located on the plot of land he formerly resided on.

John Kettell took up residence in a portion of land in the southwestern corner of Stow, where the flatness helped with farming and its proximity to the Lancaster Garrison House (in present day Bolton, Massachusetts, owned by Reverend Joseph Rowlandson) house proved vital in later years. John, who brought his wife, Elizabeth Allen of Salem, Massachusetts, and three children: Elizabeth, Mary, Samuel, and James (the only one born in Stow in 1665), proceeded to trade with the natives and farm the land, though very little is known for fact.

Both families were involved in King Philip’s War in 1676. Boon sent his family to the Sudbury Garrison House, then proceeded to return home with one of his sons and a neighbor. All three were killed. Little, if anything, is known about the remaining Boon family, but they did survive the initial attack. John Kettell sent his family to the Lancaster Garrison, which was also attacked and burned. The natives took twenty captives, including Mrs. Rowlandson (a well-known captive, the wife of Rev. Rowlandson who wrote narratives of her captivity), Mrs. Rowlandson’s sister, Mrs. Elizabeth Kettell (John Kettell’s wife), and some children. All twenty were ransomed by John Hoar of Concord for 20 £ after several months of the native life style. The Kettell family, once reunited, moved back to Salem, Massachusetts after selling their farm.